The Use Your Illusion Tour was a concert tour by the rock band Guns N’ Roses which ran from January 20, 1991 to July 17, 1993. It was not only the band’s longest tour, but one of the longest concert tours in rock history, consisting of 194 shows in 27 countries. 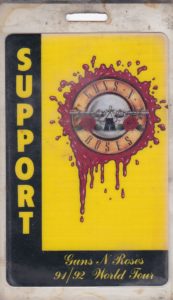 It was also a source of much infamy for the band, due to riots, late starts, cancellations and outspoken rantings by Axl Rose.

The Use Your Illusion Tour was massive not just in the number and size of performances, but also in its technical aspects and the size of the crew. A total of 130 working personnel traveled with the band during the tour, with the band using two different stages to enable faster setup.[2] The trade magazine Performance named the tour crew “Crew of the Year” for 1991.

Another great tour we had the Honor to be on ! Here’s a real working pass ! True Piece Of Rock History

The Use Your Illusion Tour was a promotional tour for the albums Use Your Illusion I and Use Your Illusion II. The tour started on May 24, 1991, approximately when the long-awaited follow-up to G N’ R Lies was to be released, and ended over two years later. The release date of the album, or albums, since there were now two of them, was pushed back to September but the tour began as originally scheduled. The tour marked a high point in the popularity of Guns N’ Roses, with a total of over 7 million[1] fans attending, and accompanied by high worldwide album sales.

/DVD set, Use Your Illusion I and II, featuring footage from a 1992 concert in Tokyo, Japan and would also provide content for the 2-disc set Live Era: ’87-’93. The tour also provided a large volume of footage for music videos, including “Dead Horse” and their popular cover of Paul McCartney’s “Live and Let Die“. Also, at one time, footage of much of the tour was to be released as a documentary, titled The Perfect Crime. The footage consisted of Guns N’ Roses’ time on the road, concert footage, and information about the riots and other major events of the tour. It was never released and never spoken about after the tour. Slash mentioned in his biography that Axl is in control of the footage and that Slash would be interested in viewing it, as he thought it captured some “killer moments” from the tour