Metallica earned a growing fan base in the underground music community and won critical acclaim with its first five albums. The band’s third album, Master of Puppets (1986), was described as one of the heaviest and most influential thrash metal albums. Its eponymous fifth album, Metallica (1991), the band’s first to root predominantly in heavy metal, appealed to a more mainstream audience, achieving substantial commercial success and selling over 16 million copies in the United States to date, making it the best-selling album of the SoundScan era. After experimenting with different genres and directions in subsequent releases, the band returned to its thrash metal roots with the release of its ninth album, Death Magnetic (2008), which drew similar praise to that of the band’s earlier albums. 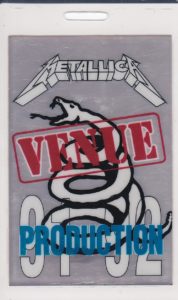 Metallica is an American heavy metal band. The band was formed in 1981 in Los Angeles by vocalist/guitarist James Hetfield and drummer Lars Ulrich, and has been based in San Francisco for most of its career. The band’s fast tempos, instrumentals and aggressive musicianship made them one of the founding “big four” bands of thrash metal, alongside Megadeth, Anthrax and Slayer. Metallica’s current lineup comprises founding members and primary songwriters Hetfield and Ulrich, longtime lead guitarist Kirk Hammett and bassist Robert Trujillo. Guitarist Dave Mustaine (who went on to form Megadeth after being fired from the band) and bassists Ron McGovney, Cliff Burton (who died in a bus accident in Sweden in 1986) and Jason Newsted are former members of the band.

Wherever We May Roam (mentioned by band members in interviews as Wherever I May Roam) was a concert tour by the American thrash metal band Metallica in support of their self titled 5th album Metallica (commonly known as “the Black album”). It began in autumn of 1991. The North American legs ran through summer 1992, followed by the Guns N’ Roses/Metallica Stadium Tour, the Wherever We May Roam European leg, and finally the Nowhere Else to Roam tour of smaller markets in North America, Mexico, Asia, Australia, South America, Europe and Israel, ending in the summer of 1993.