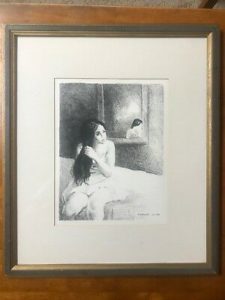 Once dubbed the “East Side Degas,” Russian-Jewish émigré and social-realist painter Raphael Soyer depicted ordinary men and women in contemporary settings. Born in Tombov, Russia in 1899, Soyer emigrated with his family to the United States in 1912. His siblings included a twin brother, Moses, and a brother, Isaac, who became successful artists. After settling with his family in New York City, the young Soyer pursued an art education at Cooper Union from 1914 to 1917, at the National Academy of Design from 1918 to 1922, and intermittently at the Art Students League. In 1967, Soyer was given a retrospective at the Whitney Museum of American Art, and his paintings have been displayed at many museums and galleries. He has taught at the Art Students League, the New School and the National Academy of Design in New York City.