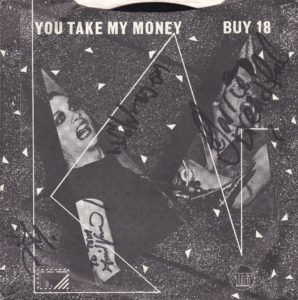 I leased The Damned a tour coach, the Band rode in a Van & the crew rode In my coach !

Great time with these people !! The Jacket is signed on both sides & has been in a Plastic Sleeve since it was signed.

“Problem Child” is a single by the Damned, released 28 September 1977 by Stiff Records as a preview for the band’s second album, Music for Pleasure. The tracks were produced by Pink Floyd drummer Nick Mason, and were the first to be released featuring new member Lu Edmunds. The single again failed to chart in the official UK Top 75, though it did reach No. 27 on the NME chart, which used a different sample of record shops.

The single was reissued in Stiff’s Damned 4 Pack mail-order set. A CD version was issued in the Stiff Singles 1976-1977 box set by Castle Music in 2003. The single was also issued in Germany.

There’s footage of some of the tour on my You-Tube Channel !

The Damned – the greatest surviving British punk band, bar none – are back with their first new album in a decade, still firing on all cylinders, and breaking all the rules. Where their peers either burnt out, or faded away into mediocrity, this most spiritually chaotic of all punk groups have never been away, never surrendered their ideals, always forged on wards.

From 1977’s high-energy entrée ‘Damned Damned Damned’, via the riotous variety of ‘Machine Gun Etiquette’ (1979), to the macabre psychedelia of 1985’s ‘Phantasmagoria’ and beyond, The Damned have never stayed in one place for long. Colorful, anarchic, yet propelled by an indefatigably urgent creative motor, they’ve evolved and expanded their remit with every phase, to become one of the top-flight UK groups of ANY pop era.

Since 2008’s ‘So, Who’s Paranoid?’, they’ve toured constantly, to raise awareness of that amazing body of work, culminating in a memorable career-spanning show at London’s Royal Albert Hall, which celebrated the 40th anniversary of their arrival in the explosive Summer of ’76.