Phantasmagoria is the sixth album by the Damned, released by MCA in July 1985. Special editions were available on white vinyl or picture disc; some versions included a free 12″ of their No. 3 hit 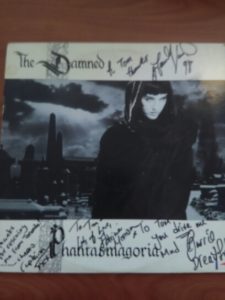 OWN A PIECE OF ROCK & ROLL HISTORY

All Autographed Items come with a lifetime guaranty & L.OA.

Had a great time on this tour ! The band was a rare look into the Punk Music industry !

There’s footage of some of the tour on my You-Tube Channel !

The Damned – the greatest surviving British punk band, bar none – are back with their first new album in a decade, still firing on all cylinders, and breaking all the rules. Where their peers either burnt out, or faded away into mediocrity, this most spiritually chaotic of all punk groups have never been away, never surrendered their ideals, always forged onwards.

From 1977’s high-energy entrée ‘Damned Damned Damned’, via the riotous variety of ‘Machine Gun Etiquette’ (1979), to the macabre psychedelia of 1985’s ‘Phantasmagoria’ and beyond, The Damned have never stayed in one place for long. Colourful, anarchic, yet propelled by an indefatigably urgent creative motor, they’ve evolved and expanded their remit with every phase, to become one of the top-flight UK groups of ANY pop era.

Since 2008’s ‘So, Who’s Paranoid?’, they’ve toured constantly, to raise awareness of that amazing body of work, culminating in a memorable career-spanning show at London’s Royal Albert Hall, which celebrated the 40th anniversary of their arrival in the explosive Summer of ’76.

Phantasmagoria is the sixth album by the Damned, released by MCA in July 1985. Special editions were available on white vinyl or picture disc; some versions included a free 12″ of their No. 3 hit “Eloise”. Wikipedia
Artist: The Damned
Release date: July 1, 1985
Label: MCA Records
Producer: Jon Kelly
Genre: Goth/industrial 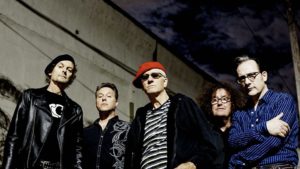 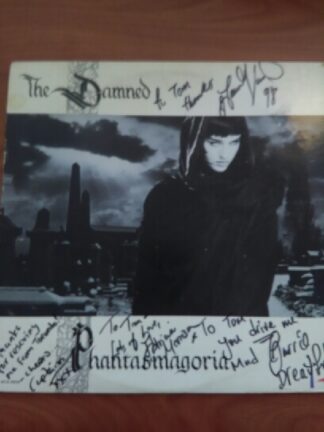 You're viewing: THE DAMNED Autographed LP ” PHANTASMAGORIA” $350.00
Add to cart