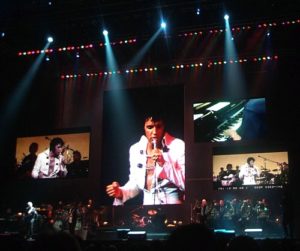 There’s only one King Of Rock & Roll !

I have had the rare honer to have worked & toured with so many of the giants In Rock & Roll !! Also with the great country artist out of Nashville !! I have few of these Elvis Passes that I will let go of ! Here’s a huge chance to Own A Real Piece Of Rock & Roll History ! My time with him was amazing ! He changed my life in so many ways & If I had never meet Elvis ! , my life would have been so different !! It’s a rare moment that I let anything from my personnel collection go ! 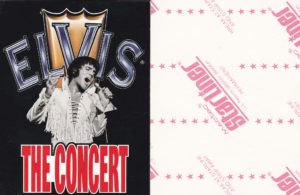 Elvis the Concert is a concert tour started in 1997 that features a video and the voice of Elvis Presley performing with his 1970’s backup band via computer technology.

In the mid-1990s, Elvis Presley Enterprises started experimenting with recordings of Elvis’ live concerts, and discovered that through the use of sound mixing they were able to eliminate virtually all of the ambient noise from the multitrack recordings, thus leaving only Elvis’ voice. After some work, they conceived a special concert, to be held on August 16, 1997, the twentieth Anniversary of Elvis’ death. The show featured Elvis’ original 1970s back-up band (TCB Band), his back-up singers (The Stamps Quartet, The Imperials, The Sweet Inspirations and Millie Kirkham) and was performed at Memphis, Tennessee’s Mid-South Coliseum. During the show, Priscilla Presley introduced a video that Lisa Marie Presley made. The video was of Lisa Marie performing a duet with her father Elvis on the song “Don’t Cry Daddy”. It was so successful that the video was shown again.

The show was a huge success, gaining worldwide press. The massive success of the show prompted E.P.E. to draw up plans for a special version of the show to take on the road.