The Guns N’ Roses/Metallica Stadium Tour was a co-headlining concert tour by American rock bands Guns N’ Roses and Metallica during 1992. It took place in the middle of Guns N’ Roses’ “Use Your Illusion Tour,” promoting their Use Your Illusion I & II albums, and between Metallica’s “Wherever We May Roam Tour” and “Nowhere Else to Roam,” promoting their eponymous fifth album Metallica. The tour’s opening act was Faith No More. Axl Rose had wanted Seattle rock band Nirvana to be the opening act, but frontman Kurt Cobain refused

We also had tour coaches on this one ! 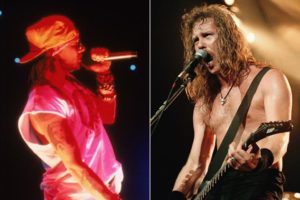 “When you have to get Guns N’ Roses and Metallica on the same tour to sell tickets,” Ronnie James Dio told WERS‘ Nasty Habits show, “it shows everyone that you have to put real big packaging together to make a difference.”

On May 12, 1992, Metallica’s drummer, Lars Ulrich, and Guns N’ Roses’ lead guitarist, Slash, held a press conference at the Gaslight in Los Angeles, California, to announce that both Metallica and Guns N’ Roses would tour together that summer, starting in Washington, D.C. at RFK Stadium on July 17, 1992, where Metallica’s opening song “Creeping Death” was recorded for their documentary A Year and a Half in the Life of Metallica.

On July 21, 1992, when Guns N’ Roses was performing at the Pontiac Silverdome in Pontiac, Michigan, when the band was done performing their song “You Could Be Mine“, Axl Rose vomited onstage and left soon afterwards, but returned to the stage and apologized to the audience for the poor performance, so the band redid the song again.

On July 29, 1992, while Guns N’ Roses was playing during the second show at Giants Stadium in East Rutherford, New Jersey, Guns N’ Roses frontman Axl Rose encountered severe pain in his throat, but he continued the show until he was hit in the genitals by a cigarette lighter thrown from the audience during “Knockin’ on Heaven’s Door“, so Rose retreated backstage to regain his energy, while bassist Duff McKagan took over on vocals and then the show ended.